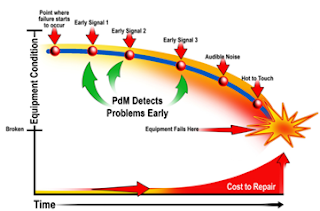 The P-F interval (shown to the left) is sometimes taken as a graphic that shows how equipment fails and how long that failure will take. This is sometime called prognostics or remaining life. The truth of the matter is that it is really just a model of what one failure mode's failure probability looks like as it progresses down the path to functional failure.  The probability of failure goes up as you move down the curve. We can not plot out how long something can last once a defect is present. We simply do not have enough failure data on most common failure modes to accurately predict the time to point F or the point of functional failure. Our model is great for explanation of key concepts but fails to predict key points with anything more than probability. If we did have the number of failure data points for each failure mode then the down time collecting the data more than likely would have put us out of business or out of a job. Reliability Engineering is about eliminating and mitigating failures and by extension reducing the occurrence of data points.
Now their are exceptions where more is known about the individual failure modes and one example is some of the work the University of Tennessee is doing in the area of battery prognostics but, this is the exception not the rule.
Let me show you why we use the P-F model to make explanations not predictions. Let's take a bearing in a pump that was run with dirty oil. In that dirty oil was a particle of alumina or other hard substance. That particle is caught between the bearing element and the bearing race and a small dent or pit is created as the element tries to crush the hard impurity. Now our bearing has a defect that is not that different from a pot hole on the road over time it will grow.  When the elements roll over the pit the sides began to chip away these chips now contribute to additional impurities in the lube and the pit becomes larger the failure mode moves down the P-F curve in our model. Here is where chaos reigns. What if the load on the bearing increases and the elements presses on the spalling area with more force? What if an element catches a piece of the spalled out metal and skids creating additional heat and damage? What if the load decreases or the product being pumped changes? What if the filter that was bypassing is changed and suddenly the oil is cleaner? The point is all of these situations could change the time to point F. This is why we use the condition based maintenance (CBM) techniques to identify defects and start our planned replacement process not try to measure more frequently and "get all the good out of the bearing."
The point is that the P-F Curve is a great model for explaining why we do CBM and how it is different from traditional Preventive Maintenance and it is also very powerful for showing the link between the technologies and planning and scheduling but is not a timeline that can be used to "predict" when failure will take you down.
How do you use the P-F curve?