Facts and Statistics on Growth, Skills, Reliability, and Manufacturing

Today's blog post includes many facts and statistics that I have collected while preparing to present at the American Fuel and Petrochemical Manufactures Reliability Conference this week. This is the group formally known as NPRA and if you are going to be their look me up. These tidbits are from various recent magazine articles and studies and will help you communicate the need for both education and retention of talent in your facility.

According the Group Outlook Survey and and an article in Plant Engineering mid size manufactures are seeing the following:
What does all this mean? Manufacturing is growing. They are hiring. They are buying new equipment. They are buying more raw materials here in the US. That effects most of us.
Questions: Are they building reliability into the new assets? Are these new hires ready to operate and maintain equipment at a level that can facilitate the increased output that is required? With this growth in the market and the 401k investment value now returning to per-recession levels will we see baby-boomers retire in mass?

According to a 2011 ARC Advisory Group report:
What does this tell us? We will continue to have to do the same or more with less people so automation will grow and efficiency through skills and application will be more important.
Questions: Do we have the skills? Are we spending on training to create the skills to operate, maintain and troubleshoot automation and increasing equipment complexity?

According to Fractional Research Inc. a company that does distillation research for chemical and engineering companies:
What does this tell us? We can't wait. The time is now. We have to collect the historical knowledge via our Maintenance Planners through the job plan library, Reliability Engineers through FMEAs and through our Process Engineers by incorporating existing knowledge into our automation system logic.
Questions: Are you collecting experience?

According to a 2012 report by the Construction Labor Market Analyzer (CLMA):
These skilled trade represent a drain of trades from manufacturing and capital improvement and shows a systemic issue with the trades in general.
Questions? What are you doing to retain and up-skill your trades?  Will you have what you need to meet the sales growth and increased volume we mentioned above?

ChemicalProcessing.com recently ask their readers "How will the retirement of 'baby boomers' affect your site over the next 5 years?"
What does this mean to us?
With companies offering a 10% increase in compensation over the current level as a new hire, engineers are entertaining offers of employment elsewhere. Others are retiring. You could be loosing talent and experience.
Questions:
What are you doing to retain your engineering talent? Are you providing recognition? Are you increasing wages to match the industry?

The "Perfect Storm?"
With the need for skilled trades and skilled engineers in manufacturing increasing due to demand driven by economic recovery and capital expansion battling with the departure of the "baby boomers" of both disciplines with the return of the value of the 401K retirement plans, we could be set for a "Perfect Storm." That storm is a skills shortage not a people shortage. To compound the situation many companies underspent on maintenance during the recession creating assets that are unreliable and running with the defects of not being properly cared for. Now we are asking those same assets to produce more and run harder and those induced defects are coming to light. Do you have the skills to fix them?
What are you doing to keep the skilled, collect their knowledge, and equip the future employees for your success?
Will the loss of skills and knowledge take with it your reliability and in turn your ability to meet market demand?
No comments:

Many of us have preventive maintenance task in our facilities that are made up of a noun, a verb and a few connector words. They look like these:
Do these look familiar? If they do then ask yourself  two questions. If you send your 20 year veteran mechanic and your 4 year technician out to do these task will you get the same results? And secondly, if you send your 10 year technician out twice over  a 3 year period will he or she do the same thing both times? The answer is probably not. This introduces variability into your equipment maintenance strategy and unreliability into your assets. So what can we do? Here is one examples of how we could very simply step up repeatability and effectiveness of your tasks. 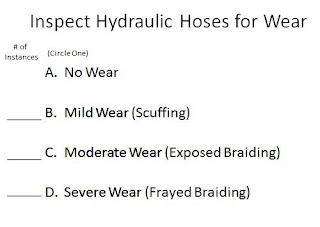 Let's say you have a PM task that traditionally would have said "Inspect Hydraulic Hoses for Wear" You could get any number of different responses and levels of performance. Even if you add the levels of wear A through D you still leave room for interpretation. Whats the difference between mild and moderate? But if we add the descriptions in parenthesis then it removes quite a bit of the ambiguity. This become a much more effective and repeatable PM step. We can take it a step further if we are equipped to collect additional data. If you record instances of each on the asset you can improve the task even more to a quantitative level. This quantitative PM is the best indicator of asset health.
The key here is that PM task do not have to be long and full of loads of pictures to provide good results you just have to choose your words wisely. 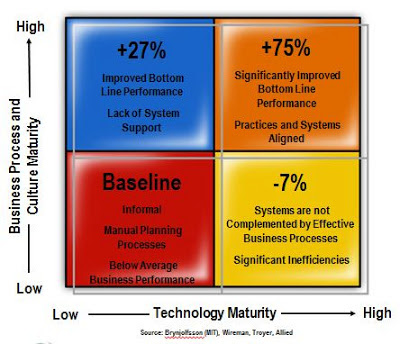 Many of us in the reliability world love to implement new technology in our plants. It might be a condition monitoring tool or a new piece of software like a EAM or CMMS. Today I wanted to share with you a study and graphic that shows the return on investment of both technology and process as well as the two together. In the beginning you start in the red box and you implement new toys and technology and you end up in the yellow box with a negative 7 percent return on investment from your new tools in old processes. So what if we went after better business processes first. By re-engineering our business processes and removing the waste we are able to generate a 27 percent return on investment and arrive in the blue box. Not a bad return but, if we combined our new processes with our new technology we are able to get a return on investment that is very respectable 75 percent and land in the orange square. It is the "synergy of and" versus the "tyranny of or." In the end for the most success we need both in our strategies. You need the processes to start the improvements and then the tools to support the processes for efficiency.